Pottery is elemental for Jaye Pope And after 20 years of trying to fit it into her life, the colorful mugs, bowls, vases and sculptures she fashions from clay have earned their rightful, central place. “Clay is Good Dirt,” the sign tells visitors to her studio-showroom as they enter, to the soothing sound of gently trickling water from the mouths of colorful fish she’s been creating for a dozen years. For Pope, pottery is as basic as the earth itself. When she combines clay with fire, air and then water, she asks, how much simpler can it get?

“I think there’s so much magic in clay,” says the 40-year-old craftsperson, who remembers falling in love with pottery from the time she was a high school student in Templeton. “From the first time I saw my high school teacher throw on the wheel, I was enthralled by the magic of seeing this clump of earth … it’s almost as if it comes to life, and you can watch it start to grow.”

Pope watched her own passion for pottery grow, from the time she attended Greenfield Community College and learned design, figure drawing and other aspects of art, through her years working at Berkshire Porcelain Studios in Shelburne Falls, where she learned how to fire the kilns and the decorative aspects of clay. “I was in heaven,” she said. “Not only was I learning, but I was getting paid. It was like the added bonus.”

Then from Sarah Hetlinger, of Bald Mountain Pottery, she learned about production pottery and running a showroom. “I’d sit at the wheel and churn out hundreds of candlestick holders, honey pots and mugs,” Pope said. She vas very meticulous. It was great. I was getting paid for it … but the arts don’t pay a lot.”

To make ends meet, she took jobs for five years operating heavy construction equipment, bricklaying and doing asphalt paving. “Even though it was really good pay and it was interesting, it wasn’t where my heart was,” she said. “I wanted to start a family and be close to home.” Even while she operated a fork lift over the next 5½ years at Yankee Candle Co., she kept her hand in the clay. “All these years, no matter where I lived, I’d always have a space for pottery,” she said. “When I was growing up there was a spare bedroom where my father set up a place for a pottery wheel, and I’d throw pots.”

While living in Shelburne Falls and then Hadley, she even hauled her pieces back and forth in the back of her car to the kiln at her parents’ house to fire it. “The stuff is just dried mud, so I’d hit a bump and there it goes. It was nuts,” she recalled. “It was a passion where you can’t explain why you do this.”

No wonder Pope headed off to check out the unused shed behind her present Montague home when she and friends went to look at the house seven or eight years ago. She was so enthused that the outbuilding had a chimney and lots of workspace that she immediately decided the house was for her  without even checking out the house itself. She sheet-rocked and insulated the outbuilding, equipped it with used kilns she bought from Berkshire Porcelain and the Shelburne Falls Art Bank and recently added a heater to the space where the dominant creatures are clay.

A fish story: It was as she was working on refurbishing the old Wirthmore Feeds building into Salmon Falls Artisans Showroom that Pope imagined salmon climbing up the side of the building overlooking the Deerfield River. At Foster’s Supermarket, she special-ordered a salmon after convincing seafood manager Sam Deane that a headless fish and reattached head just wouldn’t do. Then she went home to make a cast.

The salmon on the side of the building never came to pass, but Pope’s idea spawned a new venture, as people liked the fish she’d created and bought them. Then a friend caught a trout in Westhampton and gave it to Pope to cast. People thought it was really cool,” she recalled. “Then I figured if I popped a hole in there, I could put it on a stand and maybe have water go through.” At the first craft fair she brought them to, the trout sold so fast that that the craftsperson in the next booth dubbed them the “flying fish.” “Then I got bored with trout,” Pope said. “There’s only so many fish eyes a person wants to paint in the course of a day.” So she went to Bread & Circus and bought a striped bass, made a cast and began producing a variety of sculptures  bass with stripes going down their side and carp (or so they appeared) in an array of bright colors with stripes or spots of blue, green, orange, red, yellow. Rather than trying to be faithful to fauna, she said, “They seemed more like jelly beans. It’s just a fantastical kind of fish.” 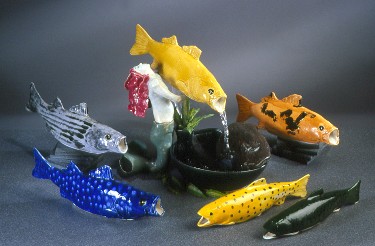 Then a woman at a craft fair told Pope that she loved the idea of putting the fish in a fountain with a hose circulating the water, but didn’t have any room for one. So the craftswoman rigged up a pump, a bowl with a little tower, and a plastic tube to make a recycling table top fountain with water circulating out of the fish’s mouth. “The fish sits up there,” she said. “They became really popular; they can go indoors or outdoors.” To Pope, “The fish a cool creature: it lives in a part of a world we don’t have any clue about. Humans are so much into symbolizing their world, but this is a whole other part of our world we don’t see.” Aside from that, she admits, “It’s a fun image to work with. If there’s anything to say about my work, I like working from mythology and fantasy.”

And so, since the curly-haired potter “didn’t want to do fish over and over,” her fountain making evolved into fashioning a ceramic mermaid, and then a merman, to hold the fish, with a pottery rock to hide the pump. With business training Pope got 1½ years ago from the Franklin County Community Development Corp. after she was laid off from Yankee Candle and became a full-time potter, she’s learned to balance the sculpture she’s evolved into with the bread-and-butter pieces that people buy most. “I think a lot has to do with the outside economic atmosphere,” she said. “When times are good, people buy more decorative pieces; when they’re tough, I do more functional work.”

But that doesn’t mean dull. Pope’s shop is replete with periwinkle-glazed bowls decorated with dragonflies, raspberry-colored mugs with human figures, black dishes with a smiling moon  all showcasing her love of drawing and a fun sensibility that reaches out from her isolated work to connect with potential customers. “Part of the delight of doing shows comes after spending three or four hours setting up the day before to create a whole environment, and sometimes spending hours when no one stops by. “People look in the booth and smile,” she said. “Even if they don’t buy anything, I stop them in the course of their busy day and get them to smile and think about something they’re not normally thinking about. They’ll see a fish and people burst out laughing.” It’s fascinating also to watch how people react to the shape of a mug, or to color  “a really powerful thing that can either make a pot very beautiful, or very ugly.”

After the cycles upon cycles of taking a clump of clay, throwing it on the wheel and fashioning it into a shape, then firing it and firing it again, it’s presented to the world. And after all of the isolation, the potter finally meets with a reaction. At a Labor Day weekend show in Vermont, Pope had just such a long visit with a couple about her work who walked away … and then the man returned to buy a pair of mugs the woman had been looking at and trying out. “It was a big deal purchase for them,” said Pope. “It’s not about the money as much as the thrill of creating that personal magic to bring other people in, so they feel the magic.”

For Pope, the magic, too is basic. “What I love about pottery is that it keeps me connected to the Earth,” she said. “It’s combining earth and fire. Throwing a lump of clay on the wheel to me is sometimes representative spinning earth itself. When it’s in the kiln, it’s like the early days of creation of the planet. it’s where the glazes are coming from: the rocks and minerals, through the process of weathering.

Pope seems to get goose-bumps as she points how central pottery has been to civilization, from the jugs created to carry water to scientific applications of clay in space shuttles and high technology. “It’s very much about the Earth, the planet we live on,” said Pope, whose world has come right back to a fundamental appreciation of clay.

“It’s almost a Zen-like thing, where you build your life around what you’re ultimately going to do.”