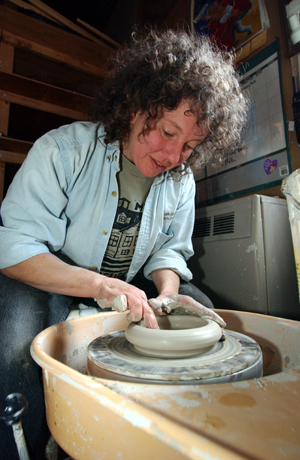 MONTAGUE - It has always been the magic in creating pottery that inspires artist Jaye Pope.

Since high school in East Templeton, the founder of Good Dirt Pottery on Main Street in Montague has been enthralled by the potter’s wheel.

"My art teacher was one of those rare people who connects with kids. He had his creativity and knowledge, and I had my creativity and desire to learn," Pope said.

While pursuing her love of pottery over the years, Pope has worked as a bricklayer, a United Parcel Service deliverywoman, a driver for the state highway department and a stock handler for Yankee Candle Co.

She received an associate’s degree in art science from Greenfield Community College and later a bachelor’s degree in studio arts from the University of Massachusetts at Amherst, and honed her skills while working for the former Berkshire Porcelain Studios and for artist Sarah Hettlinger of Bald Mountain Pottery, both in Shelburne Falls. 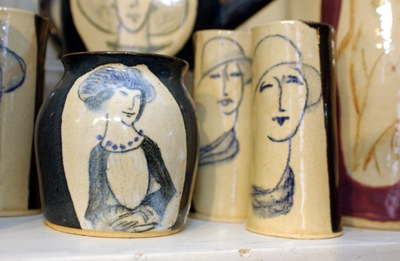 At Berkshire, Pope said she learned about kilns and experimented with glaze applications while also spending valuable time researching such things as African seagulls, blue-footed boobies and the Armenian tree of life to meet customers’ tile desires.

With Hettlinger, Pope was a production potter, and said it was during these two years that she "truly learned to choreograph the dance of the clay on my wheel."

"With Sarah I had the opportunity to do things over and over and over. The first season I worked with her I did 1,200 candlesticks. It was really great because I had all this really focused attention on form and function that shows in my work today," Pope said.

Pope attends six to eight art and craft shows annually and sells her work at Room with a Loom in Montague, the Salmon Falls Marketplace in Shelburne Falls, the Danforth Museum in Framingham and online at www.gooddirtpottery.com and www.shopwesternmass.com

"Handmade pottery is such a personal thing. It’s personal to the person both creating it and the person selecting it," Pope said. "It’s fun to watch people when they come into my booth at a show. They hold (a piece they like) and then look away. It’s like trying on a pair of shoes. If they don’t fit, you won’t wear them."

Pope founded Good Dirt Pottery three years ago, finally allowing herself to focus on her works in clay, at least part-time.

"When the passion’s there you just have to do it, or it makes you crazy," Pope said.

While she enjoys making the tabletop koi, Apache trout and striped bass fish fountains - one that features a "merman" sporting a deep green tail fin, leaning on a shapely rock (that hides the small water pump) and holding a trout - she also enjoys drawing and carving figures into clay and creating sculptures.

"It has to be fresh and fun. I mean, I love the fish and people love the bright colors, but how many fish eyes can you paint?" she said with a laugh. "Not a lot of potters draw on their work. I’m still keeping this production line alive but I’m trying to fit it in with the other work I’m doing. It’s not just throwing functional things but things for you to hang on your wall and then use and then display again."

Her studio’s motto, "Clay is Good Dirt," came to her in 2001 while she planted seeds in honor of a newlywed couple’s Rhode Island union.

"The groom’s father, who was the officiator, was talking about the cycles of the seasons and how we go to plant seeds in the good dirt, that the harvest grows from the good dirt. There was this whole cyclical thing that I liked," she said.Three years later, Pope continues to be inspired by her stoneware clay medium on both the wheel and in hand building, aiming to eventually fulfill her lifelong dream of supporting herself entirely through her own creativity.

"I love the fact that I’m working in this medium that’s so earth-centered," she said. "I love the fact that pottery has a place in human history. You see it in the Egyptian tiles and the shards of pottery found from ancient cultures that people used to carry their water and store their grains. I just think it’s fascinating to take this really malleable thing here, and after the process is done it’s this hard, permanent, usable, beautiful piece of art."

Pope holds an open studio at Good Dirt Pottery the first Sunday in May and the second Saturday in December.